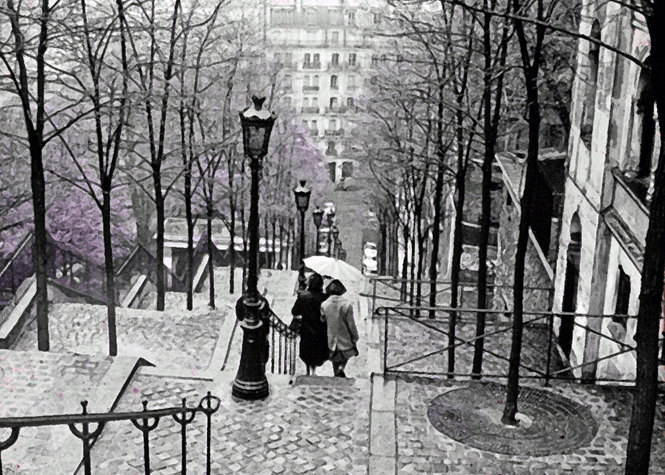 Paris. France. April 9, 2013. I have been travelling through various cities in Europe since mid-March, both for work and rest. This post is written from my current city – Paris;  sitting right next to the steps of Square Caulaincourt, Rue Lamarck, Montmartre.

While in later posts, I shall post pictures from the travels, today marks the first death anniversary of my father, who passed away due to a sudden swift heart attack last year.  Youthful, hyper-active and conspicuously full of life – he remained that way right up till the very end – bursting with frank, undiplomatic outspoken chutzpah, never afraid to call a spade a spade, and  so vibrant that friends, neighbours and his loved ones still miss his vivacity and near-comical foot-in-mouth well-intended but bluntly-phrased verbal gaffes even today.

This morning I had a long talk with my mother – my parents had eloped and got married in their 20s and remained married till his death.  My mother had a Ph.D in Philosophy with a minor in Mathematics, and my father a Ph.D. in Geology with a minor in Physics. Definitely not the most diplomatic nor quiet person around, he complemented my mother’s calm, logical Spock-like reserve.

I have to hand it to my parents though – that in all the years I know them – I never saw them have fights – no screaming drama, no loud vulgar expletives; no vindictive arguing, no throwing things – none of that; none at all. The occasional short argument for sure, which was usually over things related to infrastructure – such as a broken plumbing fixture, a fridge door accidentally left open too long – and that sort of thing – but never, never the bitter, screaming, shouting matches that I have sadly heard some of my friends say they witnessed among their own parents.

My father certainly loved my mother a lot – although he was self-centred and not a great planner. My mother loved him in her own deep and quiet ways. They had very different personalities, he a scientist/musician who went to work in management later, with a past in athletics and the arts and a straightforward candor; she a composed, complex woman who loved books and solitude, and had studied philosophy & mathematics only because due to the sexist Victorian attitude of her own father she’d been deeply disappointed for life that she was not allowed to enter Medical school despite acing in her school board exams…..

But somehow they made it work – first out of love and the rush of romance in their early years, next for their two children and raising a family; and finally out of the bond and habit that form in couples who have spent several decades together, and no longer can think of other options, but have become more like best friends. She still remains one of the calmest women I have known – stoic, pragmatic and perhaps too emotionally reserved and withholding, an incisive nag at times but very rare and far out in between. Drama and hysteria are as alien to her nature as the color blue to the planet Mars.  Sometimes I wish she would not be so detached and reserved, with a nigh-smugness at her own ability to be so.

My father – on the other hand – was warm, animated, gregarious, accident-prone, dramatic – a bit of a braggart – but a heart that was almost naive in a somewhat childish way of guileless goodness, and a simple, uncomplicated way of thinking. With a Frank Costanza-ish style of overtly hyperbolic gestures, there was never a dull moment around him. My mother’s smugness at her own calmness was matched only by my father’s joy for his own flair of unintended comedy and drama.

I realize now that I was raised by a math-whiz mother who was like a female Mr. Spock – a Ms. Spock, and a father who was a lot like Captain Haddock (from Tintin) minus the swearing and drinking mixed with a generous dose of Seinfeld’s Frank Costanza (minus the “bro” or the “stopping short” antics). He was a teetotaler, as alcoholic drinks gave him non-stop hiccups – much like me – except I can manage a good glass of wine, and an occasional cocktail, but anything else, including aerated drinks sets off those damned and comical hiccups. 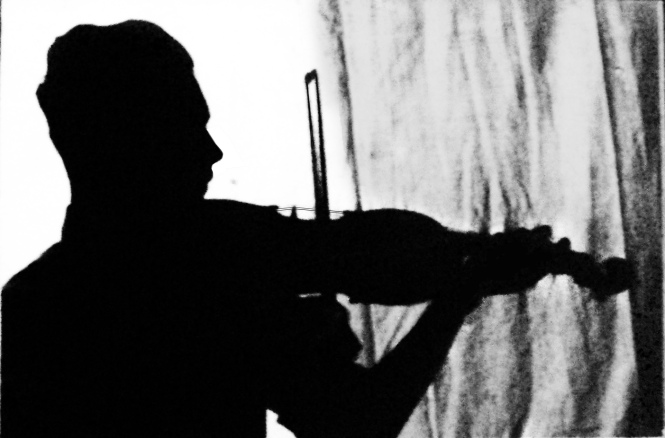 My father playing his Stradivarius. My first memories of him, perhaps even from the womb, are of him playing his violin. The Dad with the Strad. When I visited my parents in 2009 I made them tell me their entire story of love, courtship, elopement, marriage, trials, tribulations, togetherness. And it was beautiful how happy and excited they got as they narrated their tale full of plot twists and turns. He had wooed my mother by fiddling music for her when he first met her some fifty years ago. It was love at first sight, he said.

On the night of his death, I was attending a concert by Anoushka Shankar in New York City – whose father’s music had been introduced to me at a young age by my own father.

On the first anniversary of his death – I am enclosing this mesmerizing concert – the one she played at Lyon, France. It was her exploration of the Indian gypsy roots of Spanish Flamenco music. Unquestioningly one of the most elegant, exotic and beautiful series of compositions I have ever listened to.

Lyon – a city not far from the one from where I am writing this…..

To a rainy evening in Paris, the timeless winding streets of Montmartre,  to flickering lights against a wet dark Spring sky, to love and loss, to friends and family, to life and travel; to new beginnings and forever-goodbyes……..

To closure and to letting go.

To memories – which can never be forgotten. And to the seeds from whence we come from – before we disperse like nomads into the sands of time or scatter like dandelion clocks unto the winds of change……….

“In memory of my Dad’s birthday”

“And still my sitar gently weeps.”

and “The Four Mothers”