‘‘HELLO WORLD” is the greeting automatically generated when you create your own blog-site on WordPress.  My first instinct was to rewrite a new heading as it asks you to. After all, this is my virgin entry (not on the web, but on my very own personal ‘blog’.) Then, on second thoughts, why not leave it as it is and use those words as an inspiration?  How would an alien visiting our planet say ”hello” to the world? Or better still, the Eye (or perhaps several pairs of eyes) that reside and fly high above and gaze upon this blue planet? Do those ‘celestial’ entities look down on us from the blackened vacuum of space and holler ‘Hello World’?

Sorry those who believe in some bearded Michelangelo-esque Almighty Father whizzing around afloat a bunch of fluffy clouds surrounded by winged angels and gazing down upon us with benevolent eyes. Alas, I do not believe in the politics of religion. Nor in the presence of a bearded grandpa watching us from above. Or for that matter, any other variations of godly grandpas with or without beards be they white, yellow, blue or black and strangely are supposed to resemble flying humans in robes from past centuries. Hmmm… Today, the  ‘flying men in capes’ are referred to for what they are: fictional comic-book superheroes. In the ancient world, flying men were given quite a different name and degree of blind reverence. Wars were fought for these unseen fliers….”my hero-god is better than your hero-god.” Translation: My Superman (or Spiderman) is better than your Batman, you idiot! Believe in him or I kill ya!   I wish works of fiction were recognized for what they were: fabulous tales by imaginative, judgmental writers and madmen from an ancient world. What still baffles me is how even today billions believe in the ‘powers’ of ancient comic-book superheroes controlling or helping us from above. And gazing upon us from starry abodes.

All right, back to those REAL sentinels in the sky :

My reference to the “eyes in space”, of course, is to two amazing man-made flying objects – which I shall name later – orbiting around our planet thanks to some of the most brilliant brains of the world. There are several of these objects, unheard, unseen (except sometimes as a tiny moving star across the night sky.) And it is to these that we owe much of what we take so much for granted today in our everyday lives. Television, cell phones, GPS trackers, weather charts, road maps and of course, the internet…..and the list goes on.

I wonder what most people think of when the names of the above inventions pop up? I do not know. To each their own. After all, to say how profoundly these services distract and complicate but far more extensively enhance, secure and inform our lives would be an understatement. We have methods of information, knowledge and communication available today which even a generation  back might have felt like science fiction. So the thought which pops in my mind often is that these  ‘luxuries’ are possible only because of those silent, orbiting bodies in space watching over us, those elaborate contraptions that some of the best and brightest geeks of the world have conceptualized, designed and built  : Satellites.

There are many of  Sputnik’s descendants gallivanting around. But the ‘two’ in particular that I refer to above are amongst my favorites : The Landsat 7  and the Aster Terra Satellite. I call these two the ‘aerial artists.’ Why?  Take a look at the images they made possible. Earth as Art indeed.

RED, BLUE, YELLOW – A NEW WAY TO LOOK AT THE ‘EARLY’ PRIMARY COLORS. 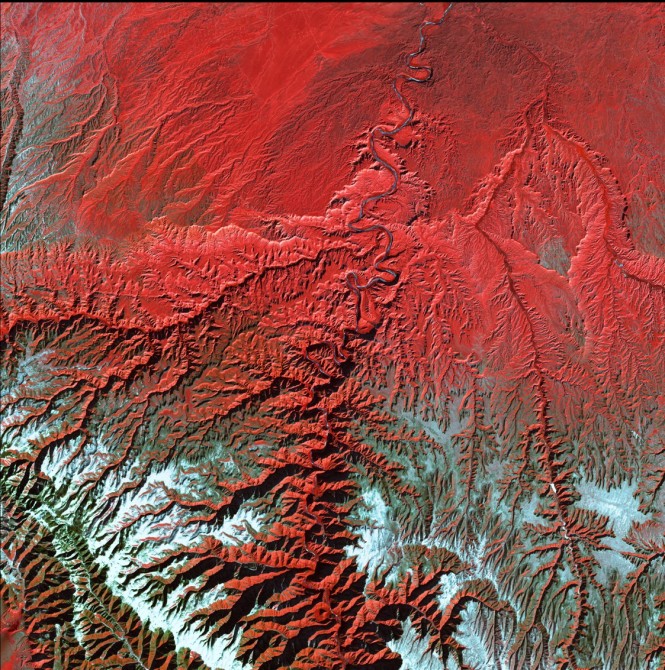 RED : Utah’s Green River flows south across the Tavaputs Plateau before entering Desolation Canyon. The Canyon slices through the Roan & Book Cliffs which resemble long staircase like escarpments. Nearly as deep as the Grand Canyon, Desolation Canyon is one of the largest unprotected wilderness areas of the American West. (Landsat 7 data, USGS & NASA) 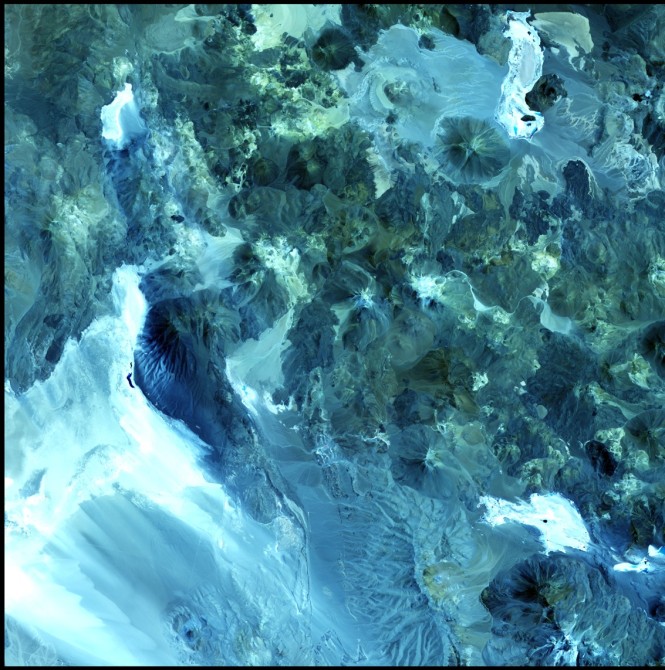 BLUE : The astounding textures in this ‘study in blues’ is but the the steep-sided volcanic cones along the Chilean-Argentinian border. Of the nearly 18000 volcanoes scattered across this region, 28 are active. (Aster data, USGS & NASA) 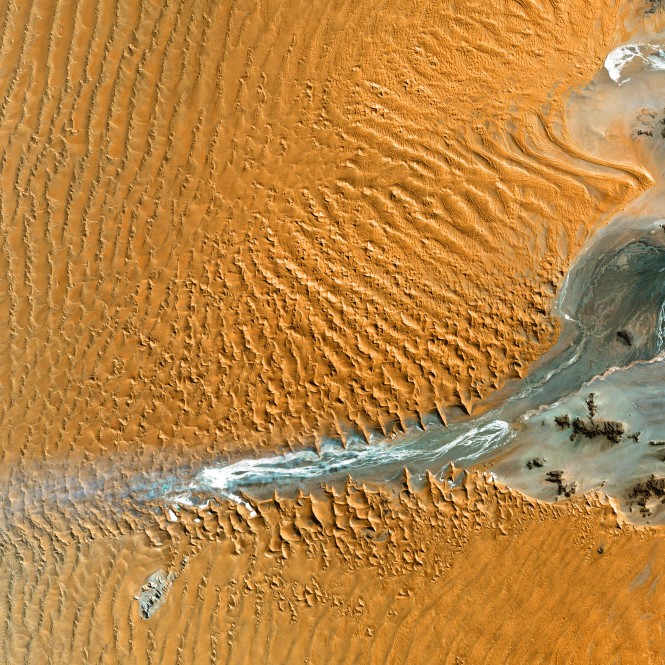 These  images were taken by the Landsat 7 satellite and the Advanced Spaceborne Thermal Emission and Reflection Radiometer (ASTER) aboard the Terra Satellite. They were created by the USGS National Center for EROS to introduce the general public to the Landsat Program, which is administered jointly by USGS and NASA.  To create these vivid RGB composites various combinations of the eight Landsat 7 spectral bands were selected. The result, as evident, creates a  remarkable intensity of color,  texture and detail.

Ever since I was a little girl Astronomy has always fascinated me. That and airplanes, rockets, forests, mountains, art, puzzles. And Lego. Thoughts of flying across space in lightning speed, peering onto our fascinating planet from above, zipping from over clouds to under the oceans – if only I could fly! And I have flown (my first Cessna in 2006) and squealed in the exhilaration of flight, but let’s admit it – which gipsy-geek has not been sucked into the sheer delight of navigating the world from the confines of a screen through Google Earth?

But before there was Google Earth, there were satellites and a particularly engrossing course we took in my graduate program: Geographic Information Systems. It was here that my love for Landsat & Terra images were consolidated. Besides the intense technical structure of the course, I would get lost in the breathtaking beauty of the images these satellites captured. Although most of our work involved more prosaic sites, it was still exciting to think that the ‘cameramen’ were the same.

On a summer afternoon I had once laboriously printed a series of these images on transparent plastic sheets which I then proceeded to stick on the glass of  my bedroom windows. It only seemed fair that the sun’s rays should cast unconventional colored patterns on the walls and floor of my little bedroom as  they filtered  through this custom-made glass-art. My ‘space-age’ version of Tiffany’s stained glass windows. I collected an entire series of  ‘satellite art’ the way some people collect baseball cards. The science behind it would leave me pondering for hours. It had taken countless hours and years of calculations, mathematics, physics and mechanical-electrical-aerospace-engineering to present the earth for what it was: A work of unfathomable art – stained by chaos, blood, fire, water, stone, silence, peace, paradoxes and immeasurable beauty. Except the last could now be ‘measured.’ And captured through lenses from miles above.

I still recall, my GIS instructor – a strict, brilliant-yet-poetic Russian-Canadian lady – who during her first class, after jotting down several numbers and calculations on the screen, announced that the way to comprehend the science of satellite imagery was to first understand the message in Antoine de St. Exupery’s book Le Petit Prince.  In fact she passed on to the students copies of the book and asked us to find out which  common  thread of thought connected GIS to the views of a fictional cartoon. That  the science of Landsat and Terra satellite imagery and its techniques and  applications would be best understood by those who could decipher the line: ”Voici mon secret. Il est très simple: on ne voit bien qu’avec le cœur. L’essentiel est invisible pour les yeux.” *

The essential is invisible to the eyes. And it is but satellite technology and RGB composites that reveal the truth  and magnificent beauty of our mysterious hidden landscapes. Years later, whenever I take a breather from prosaic routine to marvel at these images and many more taken by our L & T “dynamic duo” in space, I know what she meant.

Pictures – captivating, stunning, breathless. It is easy to see why, when confronted by such intense beauty, a sense of wonder can arise in the viewer. That there is some “higher power” behind this creation. There certainly is – the power of intricate geographic, ecological, geological and evolutionary systems. And the incredible power of the human mind and in particular certain remarkable brains which created these “contraptions” that could capture through images those parts of the world that were almost impossible to access by mortal eyes. And,  with the ability of remote-sensing devices, to actually “see” energy in wavelengths not visible to the human eye. “Hello World” indeed! If your friendly neighborhood  Terra & Landsat 7 could holler a greeting from outer space, that’s what it probably would be…. 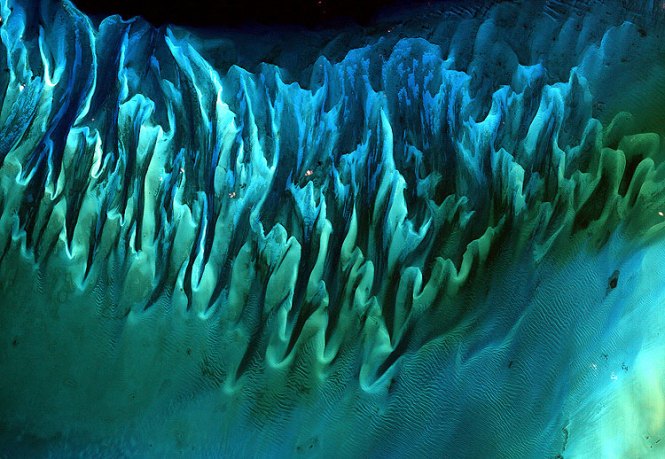 A satellite image of the sands and seaweed in..? (Guess where! ) The image was taken by the Enhanced Thematic Mapper plus (ETM+) instrument aboard the Landsat 7 satellite. Tides and ocean currents in these tropical islands sculpted the sand and seaweed beds into these multicolored, fluted patterns in much the same way that winds sculpted the vast sand dunes in the Sahara Desert.

* ”Here is my secret. It is very simple: It is only with the heart that one can see well. The essential is invisible to the eyes.”

Want more images? A short video I made with GIS images set to a Chopin nocturne. Here : https://gipsygeek.wordpress.com/2011/03/01/random-acts-of-planet-earth/

One of my favorite scientists, Carl Sagan’s take on the ‘science of Sports’:  https://gipsygeek.wordpress.com/2010/07/14/billions-of-stars-billions-of-sports-fans/